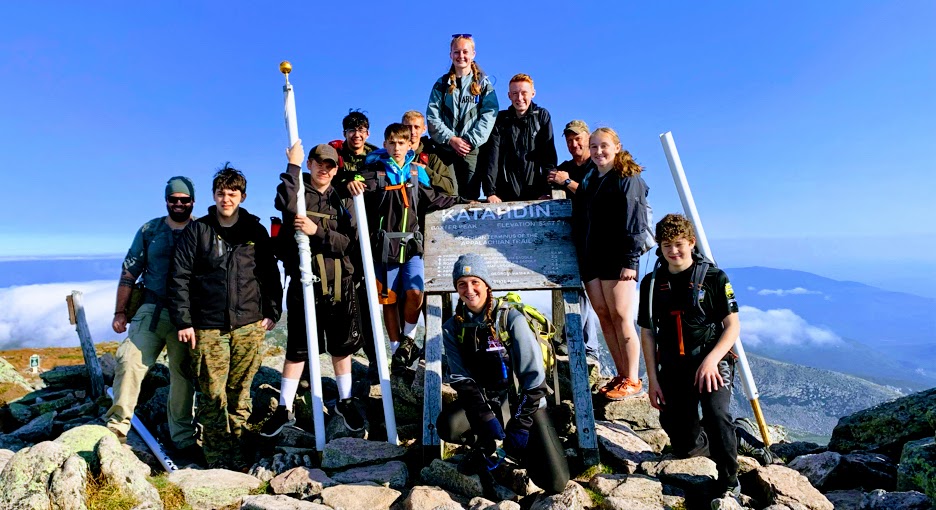 On September 11, 2022, a select group of Nokomis Regional High School’s Army JROTC cadets had the honor of remembering the victims both injured and killed as a result of the 9/11 attacks in New York and at the Pentagon, as well as the heroic sacrifices made by those on United Airlines flight 93, by raising a flag on top of Mount Katahdin in their memory. Mount Katahdin is one of 14 peaks in Maine that has an elevation of 4,000 feet or higher. This is all part of an effort the Nokomis JROTC Cadet leadership plans called, “Operation Ascend to Remember – 14/4000,” which aims to simultaneously raise an American flag on all the summits of these 14 mountains in Remembrance of 9/11.

At 0100 hours on 9/11/2022, ten Nokomis JROTC cadets climbed out of their lean-tos at Abol Campground equipped with their headlamps, backpacks, flagpoles, and the American flag. They began their ascent of Mount Katahdin’s Abol trail in the dark, with a goal of being the first people in the country to see the sunrise on September 11, 2022. These cadets were challenged not only by the darkness, but also by the rockslide that made up Abol trail. The team helped each other along the way, and were able to reach the plateau of Mount Katahdin at 0630 hours, just as the sky turned pink. After a short break, the team continued on to the summit, where they then raised the flag and honored the fallen with a moment of silence and a salute. As the cadets stood in awe at the American flag waving in the cold morning breeze and the orange-tinged sky, they thought about the American lives that were lost on this day 21 years ago. In the words of cadet Mooers, “It was a good way to spend time honoring those who lost their lives, and honor the mom who dropped her kids off at school and never came back.”

After some much needed rest and breakfast, LTC (R) Clarke led a discussion with the team about the events that took place, the heroes, and the victims of 9/11/2001. As the sun rose and the clouds disappeared, the landscape below was revealed, and the cadets were amazed at how far they had come since they began their journey so many hours before.

The flag was lowered and folded, the flagpole was disassembled, and the backpacks were prepared for the descent down the mountain. As the team began their tedious journey down the Abol trail, they were surprised to see the obstacles they had overcome in the dark on their ascent earlier that morning.

This journey will not be one that these cadets will forget. In the words of Cadet Carsley, “It was a great opportunity to see the flag raised up there in honor of the ones that we lost.”